Lolo over at Vegan Yum Yum must be stopped.  She is too good.  Aside from the *really* informative and still kinda daunting post on Food Photography for Bloggers, the recipes she posts all are easy to understand and way too easy to covet.
So, I didn't mention it here, but I decided to give up wheat for Lent, which meant my Road's End lazy-person's chreese sauce was not allowed anymore.  I often like to look at food blogs at work (I'm a food porn whore!) and then get it into my head that I should go home and make these things.  Well, I did it.  I put my food processor in high gear.  Unfortunately, this was during the period where my camera magically disappeared, so there are no photographs.
But, let me share with you some of my wisdom from the experiences.  I am still tweaking her recipes, and I'm going to link you over to Lolo until that time.
Vegan Mac and Cheese
http://veganyumyum.com/2007/10/mac-and-cheese-cheeze-yeast/
Vegan Mac And Cheese (v2.0)
(http://veganyumyum.com/2009/01/mac-cheeze-take-2/)
I actually chose to make the 2nd version first because, well, we all know that healthy spells better for me.  I used some pretty rad rice fusilli procured at Whole Foods, and then set to work.  I have to admit that while I thought the recipe to be tasty, it was...a little off for me somehow.  Then I tried the original recipe.  Dyou know what I realized?  They taste practically the same.  The nooch is very strong and (yes, we all like nooch) but I was just blindly following Lolo's recipes, which is silly.  My palate and hers aren't quite the same.  My mom used fat free american cheese and skim milk to make mac and cheese.  I also remembered that Road's End mentioned that garlicky flavor adds a little bit of zip.
So here are my tips for making Lolo's easy mac:
1 - Taste your sauce, but make sure to wait about 30 seconds after you add something new so that it has a chance to dispel.
2 - Taste it before you bake, but DEFINITELY bake.  Holy crap, the difference between baked and not baked is not even fair.
3 - Double or even triple the amount of veggies.  You will so not regret this.
Here are my tweaks to recipe 2 (I found that since they tasted so similarly, it wasn't worth it to make version 1 again....version 1 is a bit fattier and more rich, though):
So I'll get a little more specific at some point, but I'm trying to keep the comfort food to a minimum during these plentiful spring harvest times.
A couple of weeks ago, she posted a recipe for Daifuku (http://veganyumyum.com/2009/03/daifuku/), or what me and Dork call Mochi. Immediately, I was obsessed.  Dork and I set out to make this blessed Mochi. 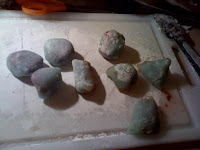 I won't lie.  We were really, really bad at this.  Like, abhorrent.  I forgot to cover the batter when we nuked it.  We burned our fingers.  We ate whatver we couldn't fold.  But, we live and we learn.  and I learned, anyway.  They were blue and for a week, so were our fingers.  They looked like little bruised rocks.  See?  What did I learn? 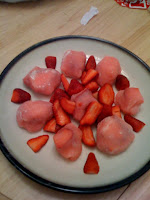 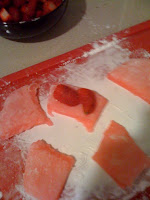 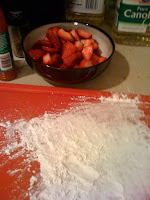 In any case, I am SO amped to try the new, awesome Cinnabon recipe posted, since we all know that I am a cinnamon roll fanatic (see any article relating to any vegan bakery I've ever visited).
Until that time, Blog Hero Worship, Lolo, we salute you!
Posted by Unknown at 5:05 PM 1 comment: