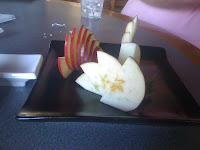 I discovered a new restaurant in Durham at 2505 Durham Chapel Hill Blvd called Kimono. It opened on Halloween. I went with Wessie and ordered the vegetable sushi combo, which includes, for 12.95: soup (choice of clear or miso), salad, 1 vegetable hand roll (avocado, cucumber, asparagus, yellow pickle, plum pickle and carrot), 1 10 piece vegetable maki, 2 pieces each of avocado, cucumber, asparagus, yellow pickle and carrot nigiri. I couldn't finish it all, but I was AMPED. The only thing I wasn't excited about was the miso soup. Even though it was super tofu, seaweed and chives heavy, I also think there was some bonito involved. =( Either way, the sushi and salad are still worth the price, especially since they serve it to you in a boat! I've never warranted a sushi boat before.

I've attached a picture of the apple they chopped up for us after our fourth or fifth meal there over the course of two weeks. Yay fancy apples.
Posted by Unknown at 4:01 PM No comments:

Battle of the Fake Cheese

So in my mixed bag from Vegan Essentials, I purchased several types of fake cheese, including the much-fawned over Teese.

I should preface this with the fact that 1 - I am still very happy with the "cheese-like" consistency of road's end, but my local whole foods has deigned to NO LONGER CARRY IT, thereby driving me into a tizzy of rage, not helped by the fact that my roommate Wessie is seriously an easy mac addict. I am easily influenced in food cravings.

Here are my findings: 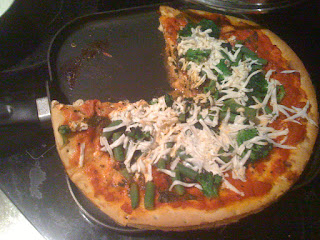 First, the Mozzerella. This is the first vegan cheese I've come across that I actually would EAT BY ITSELF. It reminds me very much of that lame-ass fat free string cheese my mom used to buy me that was pretty tasty, but didn't string out and that I would in turn share with my dog. I've had Teese Mozzarella in a lasagna, so I know it'll be good in that usage. Emboldened by everyone's love of teese and praise of its melting powers, I decided to make a pizza.

Now, as you can see, the pizza looks pretty good (as evidenced by the narfed piece). That said, you can probably see that my pizza looks nothing like the Teese photo magic pizza to the right. I can forgive the lame meltiness. It's not that bad, I'm used to un-melty cheese and frankly, I don't use cheese enough to care too much. 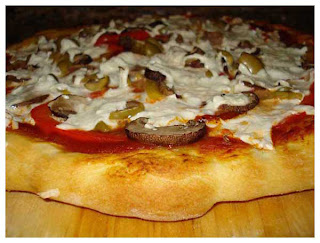 As far as substitute mozzerellas go, this one has my blessing.

Now, to discuss the Cheddar. Teese, maybe your cheddar is in beta, maybe it's still a little soft, but don't stick a fork in it because you're not done.

For those of you who aren't familiar with Teese, it comes in little red sausage roll up plastic thingies. I dislike these plastic roll up thingies f

or a couple of reasons:
1 - you have to peel it away to get to the (very slippery and very expensive) Teese, which, on my first attempt, led to a piece of (very slippery and very expensive) teese ending up on my (not so clean) kitchen floor and going for a visit to the garbage disposal.
2 - they are strangely shaped and do not fit easily into small size tupperware, which means you have to either store them in ridiculously large tupperware OR in plastic baggies
3 - the nutritional info is not listed on the packaging, which means you first have to go online, then you have to weigh your teese (or figure out how many times 26g goes into 1 lb, which I couldn't do) to know how much you are supposed to consume at one sitting.

Which brings us to the unique issue with the cheddar. Upon opening the cheddar, it looks, smells and tastes exactly like kraft singles. Which is AWESOME. Kraft singles and string 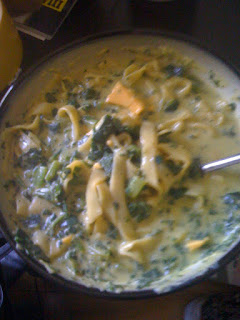 cheese-- looks like I found the two bland american cheese substitutes I was searching for! Unfortunately, this doesn't hold up. Once you put it over heat (or overnight in the refridgerator) the flavor of the cheddar literally leaks out. I noticed when making my mac and teese (with 3 servings/80 g of teese to 2 cups noodles) that it was kind of...well...flavorless. The next day, I figured since I'd spent about 12 bucks when all was said and done on this pound of food, I may as well use it. I opened the bag and my hands were covered in a cheddar smelling liquid that leaked from the Teese, and took several good washings to get off. Melted? No flavor. After a day in the fridge? Less flavor and lots more icky water.

Again with the cheddar I found the melting power to be truly lacking (note big chunk of teese floating in bowl after boiling for almost 10 minutes). I guess I shouldn't say lacking--it is about on par with Follow Your Heart Brand cheeses and similarly reconstitutes into a gelatinous sludge when it cools. While the slightly sweet and almost absence of the chalky vegan cheese flavor of the mozzerella means i'll probably shell out for it again, particularly for use in my thanksgiving lasagna, sadly the cheddar needs to go back to the lab, in my opinion.

FYH Cream Cheese at Earth Fare. I like it better than I did at the beginning of last week, when I slathered it onto a bagel for the first time. In truth, I'm not sure if it's the fact that although Tofutti is probably higher fat, that it reminds me more of the low fat cream cheese my mom used to get from the bagel place. The FYH cream cheese tastes like really really thick FYH mayo. And when I started treating it like "supermayo" it changed my outlook on this product. Instead of 2 tbsp FYH cream cheese on a bagel, try 1 tbsp FYH cream cheese on bread, with some fake bacon and a little smart deli bologna. Because FYH Mayo is so high fat (1 TBSP runs 100 Cals) while the "Supermayo" is high fat, but not even close (2 TBSP runs 70 Cals) you get more bangs for your buck. I'd stick to tofutti for your "cream cheese" needs, but as a miracle whip/low-cal mayo, this is pretty worthwhile.

3- they kinda sorta melt and burn the crap out of your mouth like american cheese
4- everyone pretends to hate them but secretly loves them like american cheese
These singles still strike the right chord when making vegan "grilled cheese" or make a mac and "multi-cheese."
I don't care that they're probably made of hydrogenated oil and the hopes and dreams of vegan children. Tofutti and I are going to run away together and make hydrogenated oil babies.

As long as I'm unabashedly praising tofutti and their hydrogenated ways, can I just say that I desperately miss Tofutti Pan Crust Pizza Pizzaz? I live in North Carolina, not the land of the vegan, but for three shining months, Tofutti Pan Crust Pizza Pizzaz found its way into my local Kroger natural foods freezer without fail. Until all of a sudden it vanished and everyone pretended they had no idea what I was talking about when I asked why it was gone. This is my "stuff I miss about cheese" post and french bread pizza is definitely up there.

Lastly, I can't review the Sheese I bought because when I opened it it had spirals on top that looked like mold and I was too icked out to eat it. Does anyone out there like Sheese? Or Cheezly? I'm starting to grow wary of trying new vegan cheeses. They can be really gross.
Posted by Unknown at 4:05 AM 4 comments:

Now that I am finally recovered, I am going to do this in lots and lots of mini blogs. Thank you SO MUCH to everyone who sent their well wishes. I'm still fighting the plague, but it's getting better all the time.

At the beginning of this week, I placed an order at Vegan Essentials for some of their "refrigerated" foods. I haven't gotten through all of them yet, but you'll hear about some of 'em in a little bit.

Anyway, I was going to buy some Parma! but I saw on the Vegan Essentials product page that you could make it for much cheaper. I tweaked it a little and have come out with a pungent, parma substitute that costs less.

Parma on the Cheap
1/2 C nutritional yeast
1-1/4 C toasted walnuts (if you toast them, it loses the raw but gains a little delicious)
1 tsp salt (I used seasoned sea salt)
dash garlic powder

Totally delicious.
Posted by Unknown at 10:41 PM No comments: