So after a good night out (saw local band-to-watch Hammer No More the Fingers and Merge Records' Broken West) after a no-good day (remodeling is like hitting yourself repeatedly in the face with a copper-bottom frying pan), I decided to keep the party going. Sick and I headed over to Stick's house after the show, picked up some beer and settled in. 5 PBRs and several hours later, I crawl up to my room and somehow miraculously wake up to the contractor calling me.

I finished off my arugala, cukes, tomatoes, bread and smart deli yesterday, so I was in a real bind for breakfast. Then I remembered-- I got a shipment from Cosmo's Vegan Shoppe yesterday (If VeganEssentials shipped fresh baked cupcakes and sticky buns, I would probably be getting a shipment from them). I had actually read about a new Chreese alternative called Leahey Gardens (VE was out of stock) that everyone was raving about. I figured this was a sign, because my local whole foods recently stopped stocking chreese for about two weeks and now only stocks the gluten-free (aka the yucky) varieties. And even then, there's usually only one box, hidden at the back. It's like a vegan feeding frenzy on the mac and chreese front. I ordered two packets of Leahey on the good faith that it would be as w 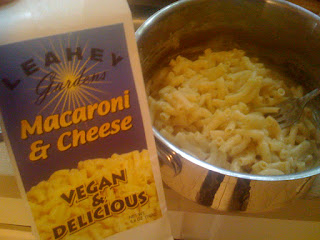 onderful as everyone said. Oh, how foolish I was.

So I put a pot to boil, boiled the noodles, dumped them, boiled up the sauce (I made it with soymilk), mixed together and noticed a vaguely milky smell, not a soymilky smell but a milky milky smell. I added some black pepper and waited to salt because I've heard it's salty.

I don't have a real camera right now but I'm working on it, I promise. But see, how in BOLD it promises that it's Vegan & Delicious? It is not. I will trust their "vegan" claim (I have a very sensitive tongue for dairy products), but this is VILE. I remember I was excited because there are about 300 calories in this whole little baggie of pasta as opposed to the 300 calories PER SERVING in Chreese but then I remembered that diet food sucks.

So what was so awful? Aside from the fact that I was really looking forward to a bowl of noodles and a salty, yeasty sauce? I'll tell you.

The noodles, for one, are cheap, thin and flavorless. They remind me a little bit, texture-wise, of the blue box stuff (my roommate left behind a case and I started eating the noodles). They are very thin, a little delicate and almost watery in flavor. I mean, I prefer a heartier pasta. Whole wheat, ideally. So lousy noodles, big deal.

Then the sauce. I made it with a cup of soymilk, which may have been my downfall. The sauce thickened, bubbled and started to look the way I wish my pudding would look in the course of about 30 seconds on the stove. I mixed in the lame noodles, blew on it and was grossed out. The sauce is very buttery/creamy tasting. If you are a vegan searching for something that tastes like dairy, this is a good place to go. I imagine it's what an alfredo sauce would taste like. Yes, I say imagine, I was the kind of kid who would refuse to eat white food. My first time eating and enjoying mayo was after I became a vegan, ditto egg salad, chicken salad etc. But I was a sucker for tri color fusilli and american cheese. I would actually say that the sort of slippery, milky flavor is a little similar to what I dislike about the gluten-free road's end. There doesn't seem to be enough umph to the sauce, if that makes sense. If you love the gluten-free, you might like this. If you like drinking curdled milk you'll probably like this too.

I had planned to divvy it up and take it to work as lunch after having it for b-fast, but I 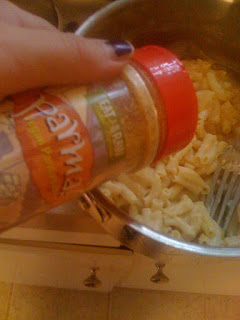 realized that wouldn't do, so I decided to try and do some damage control with another new-ish cheese product called Parma! which does not suck. It's yeasty-goodness. Another blogger said that Parma is greater than the sum of its parts, and it really is. I have used it so far in a mushroom/squash stir fry and it was great. So there's me, trying to dump in some parma. The first bite with parma wasn't bad, but it wasn't great either. (Picture is a re-creation. Didn't want to waste good parma!)

I've sucked it up and plan to go to Twisted Noodles for my noodle fix today. Just wanted to let all you unsuspecting victims out there know-- Road's End man. It's our friend.
Posted by Unknown at 11:53 AM 3 comments:

So, a vegan meme, since I've been vegan-crazy lately.

Your mission, should you choose to accept it:

1) Copy this list into your own blog, including these instructions.
2) Bold all the items you’ve eaten.
3) Cross out any items that you would never consider eating.
4) Post a comment here once you’ve finished and link your post back to this one.
5) Pass it on!

Learn about the most obscure of these fab foods at Bittersweet!
Posted by Unknown at 11:32 AM No comments:

Ok. I started a food blog, instead of using Durham Identity. I don't give a fuck! Blogger is probably better anyway.

So I'm going to try to participate in

Join us for VeganMofo - the Vegan Month Of Food. The idea is to write as much as you can for the month of October about vegan food. The blog entries can be about anything food related - your love of tongs, your top secret tofu pressing techniques, the first time your mom cooked vegan for you, vegan options in Timbuktu - you get the idea.

Last year we didn’t come up with strict guidelines for how often we wrote, but I think the idea is to shoot for every weekday, or about 20 times in the month. Don’t forget to tag your stuff “veganmofo” and you can use the VeganMoFo banner (^up there) on your mofo posts. If you’d like inspiration or would just like to whine about how hard it is, check out the MoFo forum on the PPK message boards.

As the world catches on that vegan food really is the best choice for animals (suck it, humane meat!), the planet (bite me, melting ice caps!) and people (piss off, heart disease!) let’s show them what vegan eating is all about.

One last thing - you may remember that VeganMoFo was in November last year, well, this year it’s in October because there’s more produce and stuff. Also, I’ll be in NYC this November and not really near a computer.

To be included here, just leave a comment on this blog entry with a link to your URL. I will then include you in the RSS feed, once I remember how to update it. You can also join the VeganMoFo Flicker group. Happy writing everyone! If you’re feeling at a loss for how to start this off, why don’t you make your first entry about that?

So yeah. I think rather than cook/photograph every day (holy fuck, I really need to unpack and find my camera. Good thing my furniture is en route and my room is almost complete!) I'm going to shoot for 12 food posts total this month, with 6 original recipes (even if they're ghetto) and 6 attempts at "haute" vegan food. Y'know, where it's like, involved and pretty.
Posted by Unknown at 11:19 AM No comments: