6 Monday morning, I skipped yoga :/ womp womp but was so tired, then got up and made my "Taco Meat" from this recipe. It came out fine, although tastes just like the walnut sundried tomato pate I made last year with cumin and paprika.


I dotted it onto romaine hearts with a little leftover guac and ate through it as quick as I could. After that, did some design work and recording for the new records, then headed to my last day of Girls Rock substitute teaching.

After GRNC, I came home and spun up some "sushi"-- you'd think after 3 years of this I'd have figured out some sort of way to get my rolls decently tight, but NOPE. Watched Drag Race (no spoilers, but YAY!) and noshed those, then finished a little of my returns packing and tried to hit the hay. Two problems: Godzilla and the bronchitis.

7 Eventually drifted off though. Sadly, it was probably well after 2 and when the alarm went off, I found myself, again, unwilling to get up for Yoga. So I skipped. I'm gonna be doing A LOT in the last 2 weeks I'm here. Recorded some tunes and ended up not going to the barn because the tunes took a minute, and also forgot to eat for the most part-- daily food was a banana, a nutrition bar and then a late night avocado/grapefruit snack.

8 Weds, I got up and went to hot yoga, FINALLY, then banana and pecans, then the gym. After the gym, grabbed tomatoes and a raw nutrition bar and ran to work. Quiz with Sean, then home to guac from Cosmic and cauliflower.

9 Thurs = HORSE DAY! Jazz's feet were unreliable so I took Newman out for a fantastic little jump around. My friend Catherine Boykiller came out too and rode for the first time in about 15 years, and rode AMAZINGLY WELL! Breakfast was banana and cashews, then had a few pink lady apples and a kombucha at work. After work, I splurged on another kombucha (omg I miss drinking things besides water) and had a banana. Evening snack was the avocado Catherine brought over and grapefruit.

WHEW!
Posted by Unknown at 7:10 PM No comments:

So this morning I attempted to get up for yoga...but the bronchitis is keeping me up at night and leaves me feeling lazy and less than excited about standing in a veritable incubator, so I will start the yoga back up tomorrow morning. Pinky sworn.

Instead, I ventured to Ninth Street to check out Full Lotus, the new raw juice bar and cafe. At 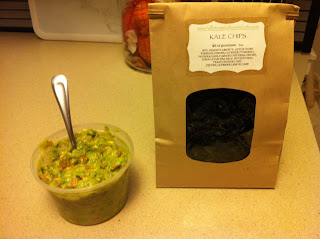 first the owner didn't totally understand...juice, yes please, but also ANYTHING THAT IS NOT WHAT I EAT EVERY DAY. I ended up getting a Green RX juice (cucumber, celery, parsley, kale, spinach, lemon, lime, ginger and green apple...maybe other stuff too!) which was really tasty as well as picking up some of Clarissa's Kale Chips and getting a salad with mixed greens, cherry tomatoes, goji berries, pepitas, sesame seeds, I think there were some sunflower seeds, bean sprouts, raisins and topped off with an ACV cayenne evoo dressing. It was tasty and kept me filledup...until about now when I went to Whole Foods Durham.
I hate to rant against my local Whole Foods, especially when I know the manager and a lot of people who work there and that they don't have as much space as Chapel Hill but MAN SERIOUSLY. I feel like the produce section is literally half the size. I know that it isn't, but it feels that way. I like the reorganization with more bulk, but now I have to wait until I'm in CH on Wednesday to score Macadamia nuts. What a pain. They do, like always, have some little gems you can't get at CH but at the moment, CH has a way better raw section so I think I'll be sticking to shopping there for a hot minute. Not that I really need to drop $13 on "chips" or whatever. With the amount of money I spend on crawkers and kale chips, it'd probably be worthwhile to just bite the bullet and buy a dehydrator.

In any case, I whipped up some fresh quacamole to eat with the Full Lotus chips and will be saving some for tomorrow when I make my first attempt at "walnut taco meat"...although the lettuce selection was also fairly dire and so will be eaten with celery sticks and romaine hearts. 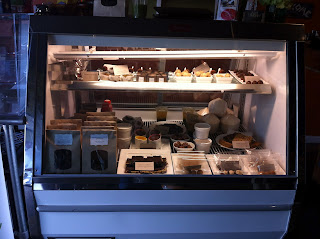 So anyway, had some of Clarissa's Kale Chips, investigated the dehydrator (you can get one for 50 bucks, might be worthwhile) and then headed out to watch the Oscars with my friend Mississippi. Total fart fest, dominated by the Artist. Womp womp. Only upside? The return of hippie juice! (AKA, ACV and water at a bar)
Am home now, having some grapes, an avocado and half a grapefruit that looks like it's going to remain here until tomorrow morning when I will (hopefully) actually get up and go to the yoga. If not, I still have til tomorrow night for a class :)
Posted by Unknown at 7:29 PM 1 comment:

I got up this morning to teach exhausted because I've got a cough that has been keeping me up all night. DAMN YOU, NO TEA! During lunch break, I stopped by Whole Foods. Totally forgot about all my raw bars! There are some new versions, called Totally Nuts. They sound good, were doing free samples. Chose not to buy today instead got salad bar and a The Raw Bakery oatmeal-apple cookie. Also picked up some raw organic bars (totally forgot about them!).

I scarfed one of those right before work, then wasted the rest of my day slingin' seafood and am now home, at 11:00, in bed, watching some RuPaul Drag Race and eating kim chi. And if it isn't just what I want to do before I drift off....
Posted by Unknown at 11:51 AM No comments:

Got up this morning and had some more grapes, dirty dirty grapes.

Hit the gym for a little bit, as well as the post office and taking care of all the housekeeping for the week. Had the rest of the kim chi from the night before, as well as some cashews.

Went to work. Working raw at this place (nowhere to put food!) is no fun at all! Fortunately, by this time next year, I'll have plenty of time to raw eat. Also, found out tonight about a new raw vegan place in Durham called Full Lotus. Details coming.

That night, I got home early and decided to watch some TV. Dinner was a grapefruit, some pecans and cashews and a red pepper.
Posted by Unknown at 11:42 AM No comments:

So today was Day 2, and I woke up energized. First item on the list today was to head to the barn and see if my man, Jazz, was still in high spirits. And by in high spirits, I mean, ready to behave. He was...sort of. But we recently took his back shoes off to see if he could live without them and today baby had sore little feet. We also did our first one strider together, but he got a little riled up. We made it around a whole course, then he got a bath and some banamine and bute and his feet painted.

And do you know what fueled this big horsey adventure? GRAPES. Man, red grapes are so delicious. Here is my grape dilemma though, blogosphere: how do you get them clean? Have you ever noticed that even if you wash them, grapes have a little film of dirt on them that only comes off on your fingers or tongue? I can't wait for muscadine season, regardless. But just sayin, if you have a grape cleaning method, please share. I have like, 3 pounds.

After the barn I came home and whipped up my infamous/beloved Emerald Kale salad. This year I decided to add some thin diced habaneros in place of the dry cayenne and whooee it was spicy but good.

I headed to Carrboro's All Day Records to play a rock and roll show as LAM! LAM! with Boykiller! We did some lady collaboration stuff; they backup danced and I played guitar on two of their songs. This will likely happen another time but it is still crazy sad that not everyone in the universe got to see it. They will also likely help me with the LAM! LAM! fitness videos.

For those unlucky souls, this is how awesome Boykiller is:


So now I am home in beddy bye, having some more grapes, some raw cashews and a little kimchi, just cuz I'm apparently a pregnant lady who needs pickles at least once a day. Looking forward to tomorrow!
Posted by Unknown at 12:22 AM No comments:

Hey everyone! I've been a terrible little blogger, but I am back for 40 days of Raw III. As we learned year one, it's actually more like 46, and this leap year will be 47!

My bar was overrun by really drunk ridiculous folks on Mardi Gras, but I had a good time.

Anyway, day one was easy. I spent most of today at the barn, so drank a coconut water before riding, then went to work. After work I did my stock up: chia seeds, raw almonds/cashews/pecans, red kale, tomatoes, grapefruit, grapes, red pepper, avocados and because I was suddenly famished right then, a cruditee platter and guacamole.

I would also like to let everyone know that I will be on tour for most of the month of March as LAM! LAM! and would love to meet anyone (or crash on couches!) and will definitely take advice on any raw spots, because I am certain that I am going to get sick of gas station bananas and apples. The schedule thus far is as follows: