Just another day.  Mom is here, we went for a walk to Fosters to get her some coffee, then I came home and made a banana/strawberry/kale/hemp/maca/cacao/epic protein shake.  I used that italian style kale which has a stronger flavor than the regular stuff, but it was still cool.

We hit up Classic Treasures and saw some really nice pieces but nothing that will be my record table.  Replaced my roommate's bananas that my mom mistakenly ate. :)

Practiced for March 16th night show with the Jos.  Need to learn the words to all these darn songs!

Late lunch, cut up a cauliflower and had it with broccoli, watched some downtown abbey (still can't get into it), then met LY for dinner at Sage.  I had a tropical salad (arugula, avocado, cabbage, hearts of palm) which was tasty, but not as big as I remembered.  Maybe I just got spoiled by that ridiculous Atlanta place.

Came home and watched The Queen of Versailles, and weirdly, just felt bad for the lady because her children saw it best: David Siegel does not love her, or his kids.  He loves success.  Forget that.

Mom and I hopped in the car around 10.  I fixed us green smoothies for breakfast (Kale, Parsley, Celery, Tomato, Orange Pepper, Lemon Juice), then went to Ikea, which is nicer than I thought it was. I actually really liked the aesthetic and would totally use their stuff if redoing a room in my house in the future.  I got a nightstand, bookshelf and a new rug.

Following Ikea, we went to South Park Mall and looked at all the expensive clothes at Hermes and Neiman Marcus. I grabbed an unsweetened Lemon Sage Lavender tea at Teavana for a little pick me up.
For dinner, we drove to Old Charlotte and hit up Luna's Living Kitchen.  Luna's is small but cozy and our waiter was new and kind of feckless, but nice enough and we got (most of) our food eventually.  We had:
Sprout It Out Salad - delicious, dressing wins my heart.
Divine Bowl - I didn't realize entrees came with a huge side salad with that bangin tahini dressing, but even so, the bowl was great.  Mimicks a thai style curry.
Lemon Wildberry cheesecake - by far the highlight of the meal.  This was the best raw cheesecake I've ever eaten.  My mother clearly agreed, because I have never in my life had to fight her for my share of dessert.  It was light, airy and very tart, just a dream.

We stopped at Concord Mills on the way home so I could outlet shop for some shoes and a new skirt, then arrived home, where my mom also expressed her newfound love for Hail Merry Macaroons and asked if I wanted one for a bedtime treat.

I dropped mom off at airport then had my take out Lunasagna for Bfast!  This was probably the best choice, and one I should've just made but man, raw lasagna is such a cliche.  Theirs was flavorful and the mushrooms added a nice "meaty" texture to it that I dug.

Later in the day, after building one piece of Ikea furniture, I had some of that not-so-great anymore raw cheesecake from whole foods and a hail merry chocolate almond tart.  Super sweet tooth, I know.

I had a grapefruit for dinner before Pub Quiz, where I totally HOUSED the classical music round but it didn't matter because everything in the last round was impossible.  We got 3 right and managed 2nd place.  The boys were a little flighty for various reasons so I left early.

When I got home, I did mango/cashews for evening snack and watched some West Wing.

For Breakfast, I pounded some lemon cookies from Lunas, then cleaned the room a little before heading to the barn.  I lunged Jazz before the lesson (Supposed to start at 3) and we didn't mount until about 3:30, because at the last second I switched bay horses.  I do not love riding the one I ended up on, but he's still a good dude and easy enough.

On the way home, stopped at Earth Fare and bought a bunch of stuff.  Snack was guac and flax crackers.  I went to work at 8pm, and nobody was there.  Nobody was out either, so I went home to continue cleaning up.  About an hour later, I got a text from CB about hanging out, so I had some snap peas and kombucha, finished what I was doing and went to meet him at the Fed.  We stayed out pretty late, which was crazy given that I am sober, but it was still fun.

Woke up and ate some more sugar snap peas before driving out to Fuquay to hang out with CB again.  Got done there just in the nick of time to house a little Guac and flax cracker before work, then headed to help out at Blu.

It got pretty busy and I definitely earned my salad.  After work, I went out and drank water at Surf club with friends.  Late night I ended up having a mango as a snack then hitting the hay. 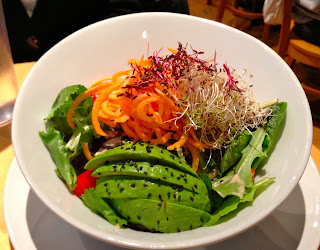 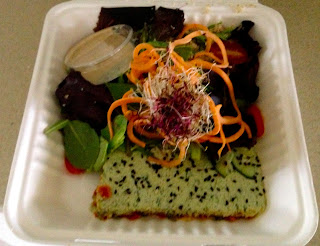 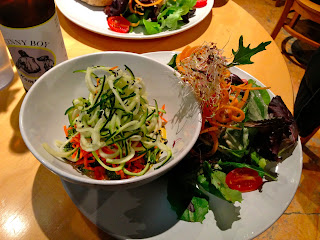 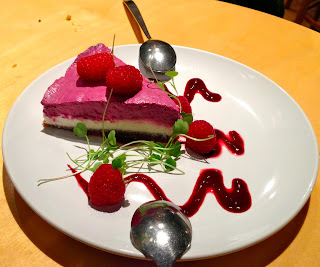 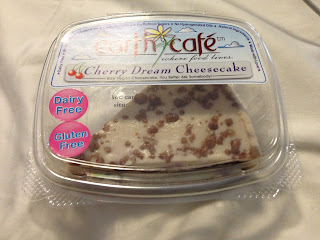 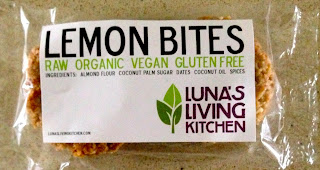