Hit the gym first thing in the morning, then failed to pack my pear for class.

At home, spun up some shakes (collards, kale, celery, tomato, carrot, parsley, lemon juice, Epic) which I then barely drank...so into the fridge they went. Instead, I had a raw revolution bar on the way to my evening leadership event, then at said event had two bananas and a platefull of raw summer squash and zucchini...(Sidebar, to the caterer at the conference center: who puts out a cruditee plate consisting solely of summer squash and zucchini?  Ever heard of carrots and celery?  They're cheap!)

After the leadership event, headed to Lucha Tigre for a Pride club event, where I had a grapefruit juice (oh, mocktails), and then headed home to work on a paper.  On the way, picked up some guacamole and salsa from Cosmic Cantina and ate them with some romaine for dinner.  Oh, and a Hail Merry meyer lemon tart for a late night, finished-my-paper treat. 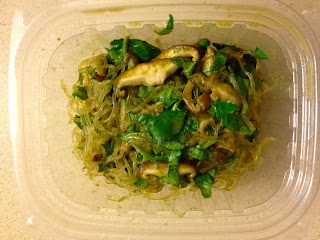 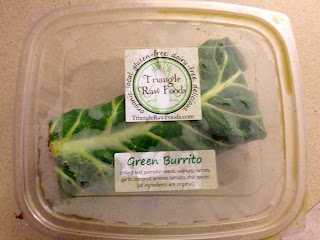 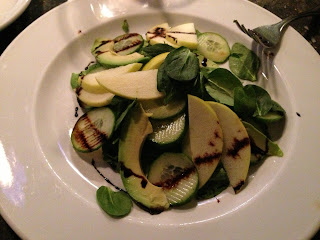 First got up and weighed in, and again went to the gym.  Am also gearing up for this DietBet spin off of my live challenge...weigh in today put me almost back to where I was before I started getting crazy with the carbohydrate.

Went directly from the gym to a meeting on campus, with one of the shakes from yesterday, drank about half, then stopped at Bean Trader's in homestead to pick up some Triangle Raw Foods food.  Expensive, and the kelp noodles spilled all over everything, but they were worth it.  The raw burrito, though?  Not so much.  It was meh, I prefer the walnut sundried tomato pate I can make at home, and felt like it was a very nut-heavy meal.

That night, I went to work where it was not terribly busy, and my shift meal was a lovely salad complete with spinach, tomato, golden apples and avocado, with a little balsamic on top for good measure.  I totally dug into it before taking a picture, so apologies for the less-than-beautiful presentation, Sami, Tu esta Mi Amor!

Went home, started to do some work and then got cross-eyed tired and went to bed instead.

Early morning meeting.  I snacked on some Chocolate Hail Merry Macaroons on the way to the meeting at a coffeeshop (and man, they are pretty good, even as someone who doesn't love chocolate), and then went directly to band practice with a new band, where I attempted to wring a math rock song out of them.

Got out of the practice at about 6, then came home and opened up a honeydew and ate it like its skin was a bowl, because it is!  Did a little homework, snacked on cashews and walnuts, then went out to see a friend at Surf Club, which now has two new rooms and is PACKED which doesn't make me like it anymore than I did before.

Probably got home around midnight, ate some kraut and cashews (I feel like I'm hard on the cashews this year!) and then passed out.
Posted by Unknown at 6:04 PM